Coach Holmes comes to us with tremendous basketball experience and is an outstanding leader. A Kansas and Oklahoma All-State High School Player, Holmes later attended Friends University where he received All-District and All-League honors in college. He has a career record of 194 wins and 93 losses as a head coach. The 2020-21 season will be Holmes’ 20th year coaching basketball.

In 2008-2009 Holmes coached the CHS girls basketball team to a 26-0 State Championship season and held a 51 game winning streak over two seasons as the head girls basketball coach. Holmes was the 4A Kansas Basketball Coaches Association Coach of the Year in 2009. Later he served as an assistant boys coach at Concordia High School from 2010-2016. Coach and his wife Tracey have two boys Cooper and Grant.

We are excited to work with Coach Holmes in the coming years. Players in the program, be looking for communication directly from Coach Holmes in before the end of the week! 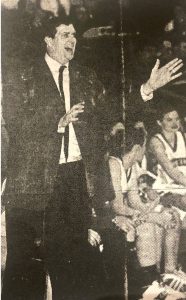